Music and sound for Josh

The genre of my game is Si-fi and so we want the music to fit with this. I want to try o create a sense of exploration as well as tension whilst leading u to the bosses in the game. There are several sounds I want for my game and to help remember which one is which I will name them appropriately, for example Ship_shoot. The files will be saved as a WAV file because it is lossless format this means you wont be losing any audio quality when reproducing the recording. These days a lot of home audio interfaces offer up to 192kHz meaning you can get a high recording rate.


Creation of my Sounds

We first recorded the sounds that we needed with a zoom H1 recorder and used an audio log sheet to keep track of what we had recorded at certain times. I then imported the sounds we had recorded onto Audacity, where I edited them into what I need for example when making a laser sound for my ship shooting I had the sound of a twang against a lamppost, I then used to phaser effect to increase the stats, the most important one to increase was the feedback. The frequency was also important as it created a high pitch laser sound. 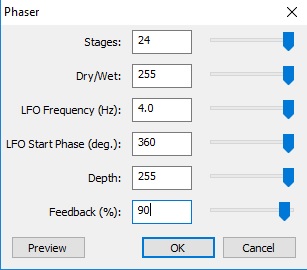 The music I did for the game was to continue playing until the player died and so I looped it in Game Maker. For the music I used a site called ButtonBass.com and merged different tracks to create my music.


Putting the Sound into my Game 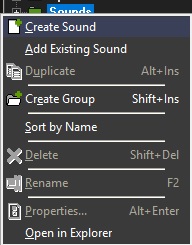 After making the sound in Audacity you now have to put it into your game to do this you would simply right click the sound tab and click create sound.

Then when the new window opens click the little file and add the sound that you want. You should them rename the sound so you don't lose track of it in Game Maker, you can also preview it to make sure you have the right one.

Overall I feel that the music and sound effects I created fit very nicely with my space invaders game. The high pitch of the music really encapsulates the Si-fi genre and adds to the feel of the game. The first piece of music was roughly 4 minutes long and was looped in game maker so it would last for the entire game. Originally I thought it might be a little too repetitive but it turns out that when you're playing the game you don't really notice the background noise. In the end I was happy with this piece. The second piece was for the title screen and was called intro_music, the idea was to has it similar to the music going into the actual game but not exactly the same. The only thing wrong with this tack is the fact that it wasn't quite in time, however I felt like this added to it even more and so I kept it this way. The next three are simply sound effects one for shooting, one for an explosion, and one for the clicking of certain buttons like the start and restart ones. The laser beam turned out really well, however the sound effect triggers every time you shoot and this is quite quick and so the noise can get a bit over bearing, due to this I had to turn in down in Audacity and re apply it to my game. I kept the sound effect for the ships being destroyed quite raw, this is because of how metallic it sounded and I wanted to give that feel the ships as well. The last sound effect was simply for the clicking of buttons and so I kept it quite simple but tried to make it as relative to the game as possible.

Link to video where the sounds have been used. https://youtu.be/wg-eMEtGgE0
Posted by Unknown at 15:54