How to find the market for the game
To find the market for the game we will have to look at several thing, for example what are the levels of violence in my game perhaps if they're high then the age rating and therefore the target audience would start at 18, the same would go for swearing or sexual themes. We also have to think about what the game is based on, this being the film Big Trouble in Little China. The target audience for the film keeping in mind it came out in 1986 is around 18 to 30 and so this means people that would have seen the film back then would be around 25-50 today and so this also caters to what our audience is going to be. 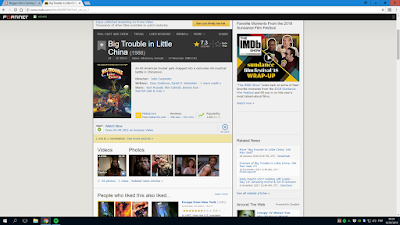 There are several different sources that both praise and criticise the film. Praise comes from IMDB which claims that the movie is an 7.3/10 and that 'This movie is magic'. However the estimated budget was around $25,000,000 and only looks to have made $11,100,000, meaning overall it lost profit. One person, who rates this a 3/10, says that the film simply isn't funny and tries too hard to 'explain the joke'. The film seems to have been more well received in America and we can tell this from the quantitative data that is provided by IMDB where it says the average score from America was 7.6 which is higher than any other country.

How did I conduct my research
I did my research by searching for ratings and reviews on the movie Big Trouble in Little China, there are several movie websites that provide that this data. By analysing the ratings we can see what age group, ethnicity and country enjoyed the films most.


How good was my research
I think my research was conducted well and was relatively accurate however I only had a few sources and so my data might not be as accurate as it could be. I do however feel like the information I extracted from the data presented was well thought out and precise. By expanding the range of my research I could get a more accurate representation of how the statistics show various data. Examples of this data would be which country the film was best received, where it made the most money, which age group found it most appealing and which gender preferred the film.

How does the film target specific people
The country that gave the film  the highest score on IMDB was America and I believe this was the intended outcome when the film was being produced, as there are several aspects of the film that I think would appeal to the stereotypical American person. For example there are many over the top action scenes in the film that include many explosions and fight scenes. The film is also set in an American China Town something that the American population would be able to relate to. The main character Jack Burton is also played by an American actor Kurt Russell, a person who was a very big hit back when the film came out.

I think the film also specifically targets males, it does this through the actual story, by having Jack the hero trying to save a damsel in distress whom has been captured by another man. The film is saying that women are just around to be saved by men. The intense action sequences and colours included in these scenes also suggest that the film has been targeted towards men. For example one of the more predominant colours in this movie would be the colour red, which is more often a mans colour, can be spotted everywhere in China Town and all over Lo Pan's lair. I'd say the age group for the film would be anywhere from 16 to 40, the simple plot line and the humour of the film appeal to all ages and allows for a fun watch for everyone.

The Target Audience of My Game
My game has a very dark setting and the story involves many messed up demons and creatures. It will include violence, gore and swearing because of this I would rate at least an 18. The movie that my game is based on Big Trouble in Little China which came out in 1986 and so the audience of the movie back then would be around the age of 40 now. For both of these reasons the target audience for my game is going to be 18 to 40 years old, in terms of gender, I am going to make it so you can play as either a man or a woman and I hope these will be one of the main reasons that the target gender is both male and female. A game similar to mine would be anything from the Dark Souls series, its dark undertones match the themes of my game very well. The target audience is very similar to mine as well with most sources saying that its males around 20 to 40 years old. This is one of the main reasons that Dark Souls is such a successful series, its grounded and mature nature that appeals to this audience.
Posted by Unknown at 02:58

Email ThisBlogThis!Share to TwitterShare to FacebookShare to Pinterest
Labels: year 2