Jack in the Bar 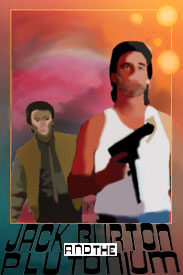 Jack Burton:  Approximately a year after the events of Big Trouble in Little China Jack is now a lone mercenary doing jobs for several big wigs in the city of Manhattan. He has a new get up now as well, adorned in the best armour he could scavenge of off his previous jobs. Adorned in a long red coat, held together by a black utility belt, that also serves the purpose of giving a home to his grenades.


Wang:  Approximately a year after the events of Big Trouble in Little China Wang now owns a bar in Manhattan and unfortunately it’s failing. Jack has some plans to brighten up his life however.

Gracie : Still hung up on Jack and saddened by the fact that he doesn't return her love, she has turned to a life of crime and found a way to resummons Lo Pan into this world


Plot: Set roughly a year after the events of Big Trouble in Little China, in Manhattan, Jack is no longer a truck driver but instead pursues a career as a lone mercenary. Now kitted out with badass gadgets and a name known throughout the city he often draws unwanted attention, however this time word has reached Jack of Lo Pans return and a strange involvement that Gracie has in it. Due to the fact that he's still obsessed with Gracie he knows that her birthday is coming up and his only way in is his old buddy Wang, since he would've received an invitation. Since the events of Big Trouble in Little China Wang as opened a bar, however when Jack visits him, four thugs jump him in the bar and he has to dispatch them before he can even worry about Gracie. Jack stakes out the famous bar Gracie is holding her party and instantly suspects something. As he makes his way in he is greeted with all smiles however he knows that something sinister is going on. As Gracie approaches Jack in the bar he can see that something is wrong, this is confirmed when everyone pulls a gun on him and Lo Pan walks out of the shadows. He has to act quickly to escape this an thankfully there's no other way he knows how.

As bars go, the Nail Creek pub took 'sleazy’ and redefined the word. A trio of waiters each of Chinese persuasion outnumbered the lone customer. Behind the chrome-top bar, hunched and moody, Wang  gazed dully at the tiny television set mounted in the corner of the room. An empty glass slid down the bar, and with honed reflexes unique to a veteran bartender, Wang caught it, filled it, and returned it with gusto, without even glancing up. It was the fifth pint of ale the man in the corner had swigged, but it was five times the business Wang had the previous night, so he wasn't complaining. After a spell, the melancholy was broken when the front doors creaked open. Wang saw four figures in trench cloaks, skull masks fastened across their faces, scanning the room from the doorway. Their eyes settled on the man still swinging ale at the far end of the bar. They broke formation; two sat at the tables on either side of the door, one sat a ways behind the ale-swigger, and the fourth approached the bar with a cocky swagger.
“Give me two fingers of Farthingale, Wang” He slurred. Wang grinned and poured the green liquor into the traditional skinny drinking vessel and gently pushed it towards the man. Leaning in close, the stranger peeled back his face mask, revealing charred skin curling outwards and blackening towards the edges. He had no way of knowing Wang was pyrophobic, but he grinned non the less.
“Put the chompers away, mister,” said the ale-swigger from the corner. “Can't you see my friend here is pyrophobic?” Wang looked stunned. How could this guy have known about his pyrophobia? Unless…
"Jack Burton” said the burned man, grimacing.
“It is you, Jack!” said Wang, turning. He'd not recognised his old compadre, and cursed himself for it. Jack always had money, and he could've charged £5 for the ales instead of 3. Then it dawned on Wang - if Jack was here, and these four guys were here, it could only mean one thing. His pub was about to get very messy.
“You're coming with us, Burton, like it or not!” said Chompers, smiling to show off the full range of his scars. Wang blinked hard. When he opened his eyes less than a second later, the four interlopers lay dead, and Jack sat finishing the last of his ale. His famous Peacemaker lay smoking atop the bar.
“Holy Cow!” exclaimed Wang. “You ain't lost your touch, Jack!”
“And you're still slower than Egg with the ales,” said Jack, grinning. He played the fight back in his mind. He'd seen the four fellows follow him, of course, and had readied is peacemaker to
dispatch the interlopers when he got the chance. Just as Chompers had turned to grin at Jack, he'd taken his shot, bouncing the bullet off of his armour to perfectly strike all three thugs right in the heart, killing them instantly. Then, to finish off the leader, he'd simply angled the peacemaker up and shot Chompers right between the eyes.
"Have you got what I'm here for old friend" slurred Jack, still slightly inebriated from the ale.  "It's all in here buddy" said Wang as he handed Jack a sealed envelope. Jack slowly peeled open the letter revealing a garish font inviting Wang to Gracie Law's birthday party, this was just the thing he was looking for right now!

As the sun rose Jack peered through his binoculars, five hours he'd been watching the bar and the only thing suspicious was that he couldn't find anything wrong. The bar was a legendary hangout for every gunslinger and truck driver in the city, a lot of whom could loosely be termed his compadres used this very spot to catch up, reminisce and do business. This time it was different, it was Gracie's birthday.
"Screw it" he muttered as he fired up is motorcycle and rode down to the bar, he couldn't pass up the chance to see everyone even if it did feel suspiciously innocent, too innocent, there was a 100% chance shit was going down here for that very reason. Parking up he ran a quick mental sitrep, peacemaker cocked and loaded naturally, an array of explosives at his belt, knuckle dusters eager to do business with some chump's jaw line and his collar turned up. There were more tricks up his sleeve than even he was prepared for. He banged on the door.
"Buzz off" said a voice from the other side.

"Jack Burton" said Jack, a moment passed then the door sprang open, a giant of a man filled the frame.
"Sweet Jesus, Jack Burton" he boomed "Come on in partner, not seen you for a while"
"Heh been busy, where's the birthday girl"
"Down in the bar and I mean IN the bar" grinning even more, if his grin extended any further he was in danger of losing an ear. Jack headed down the dank corridor towards the deafening sound of a New York bar in full flow, music with so much bass it was causing the bar to shake, booze so strong the toilets had begun falling apart. He headed straight for the bar and ordered a pint of sweet ale, as soon as he started talking.

"JACK BURTON" screamed a woman over the music which the DJ promptly stopped, silence in the bar, all eyes of Jack. Pushing through the crowd a woman with hair bigger than most approached
"Jack, it's been a while, not seen you since, well you know"
"Been working, came back to wish you a happy birthday Gracie"
"Well, well, well Jack Burton back in the bar" said Gracie grinning, people sure were smiling a lot thought Jack, too much smiling.
"We were hoping you'd come back, me, Margo, Egg and ... you remember this guy right." A huge man in regal looking, golden clothes stepped forward, a large crown adorned with gemstones sat atop his head and a billowing cape on his shoulders. Jack couldn't make out is face in the darkness of the bar but he knew he'd be smiling like the rest of these Goombars. Damn, it was a set-up the man in gold was non other than Lo Pan, Jack's arch nemesis, shit was about to get extremely real in this place and many, many people were about to be separated from the body parts they held most dear. Jack intended to get out of this in one piece and if that meant the end of this bar and everyone in it then so be it. Jack knew three things had to happen within the next second or he'd be toast, first he had to distract every single person in here that was currently pointing a gun at him, the bar was full so this meant about 50 people, no problem. Jack stamped down on the button in the heel of his right boot and waves of sleeping gas poured out of the toe and hit everyone within 50 meters, half of them would end up on the floor drooling the other half would become acquainted with the inside of their own eyelids and spend the  next week in a wakeless dream. Second he needed to nail the people unaffected by the sleeping agent, which was anyone with half an idea about Jack and what he was capable of, since they would have taken an antidote before hand, that meant the five morons that had set this whole thing up. With his peacemaker holstered and no time to draw it, plan B was to deploy one of the explosives strapped to his belt. His hand shot to the second bomb in he had holstered on his belt, he pulled the pin and let loose a flash bang. Unfortunately for her, Gracie was the only one unable to shield her eyes in time and so she felt the full force of it as she fell to her knees in agony. Next was to deal with Margo, Egg and the bouncer, he unclipped the straps on one of his grenades and it fell to the floor as it did he kicked it into the middle of the three of them and triggered it with the control he had concealed in his left hand, it sprang open and instantly pulled all three of Gracie's goons into the centre of its gravity knocking them out on one another. Finally plan C deal with Lo Pan, no doubt he had some dastardly up his sleeve, but Jack figured one thing he wouldn't be ready for was an ol' fashioned punch to the kisser. With his boots propelling him across the room and his fingers snugly tucking into his knuckle dusters, he connected with Lo Pan's jaw with all the fury of a man invited to a birthday party only to be betrayed. Finally he turned his back and swayed out of the room the same way he left

"It's all in the reactions." he muttered to himself.