Develop concepts for a game based on the movie Big Trouble in Little China.

Because two main protagonists are men and the antagonist is a man I feel like the target audience for this game would be men, not to say women wouldn't play the game, however it may be a good idea to add Gracie as a playable character to encourage more women to play the game. The age range for the target audience would be anywhere from 12 to 40, considering that the movie came out in 1986 some people may want to play the game for nostalgia reasons. The movie also has different ethnicities in it and so this might influence Chinese people to buy the game. I feel that the type of people that would be in this would be in the range of Ds - Bs. Research should also be done to see where people that fit into this target audience live as this is where the most advertising would be done for the game.

Before even starting work on the game, permission would have to be signed by the owners of the franchise, this would allow us to use the characters and places we see in the film. Clearly the film takes place in a Chinatown in New York City and caution would have to be taken as not to offend anyone. Especially when designing the Chinese character i would try to stay as true to the movie as possible. There is no nudity in the film so this wouldn't be a problem as there is hardly any in the film and adding some in the game would just restrict where it could be released and who would be able to purchase it.

The genre for the game would be an action-adventure platformer, with some different elements for transition levels. A good artistic style that would suit this genre would be pixel art. 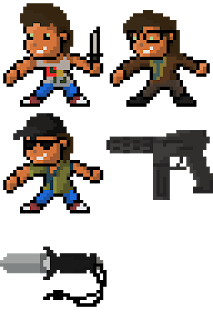